The Ancient Art of Relaxation and Meditation in Movement

Good for Health, Wellness and Self-Defense

“Whoever practices Tai Chi, correctly and regularly will gain the pliability of a child, the health of a lumberjack and the peace of mind of a sage.”
~ Ancient Chinese Saying

Tai Chi is translated as “Supreme Ultimate Martial Art”. Tai Chi is practiced as an exercise for health and relaxation, as well as a system of self-defense and martial applications. It was originally developed to eliminate sickness and promote longevity. It is a blend of form (how to move) and function (purpose of movement). Students can practice Tai Chi for either or both reasons.

Tai Chi was created in approximately 960-1126 AD in China, primarily as a martial art and has been a discipline taught by masters since this time. There are four major Tai Chi families and they are Chen, Wu, Yang and Sung. One theory of this Asian art is that a sage watched the movements between a snake and bird and Tai Chi was born. 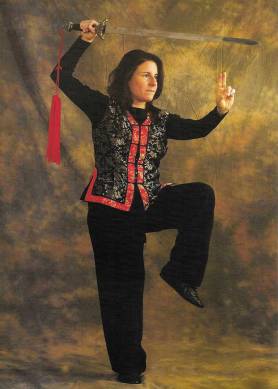 Tai Chi principles, particularly relaxation of the entire body, are the foundation of this practice. Tai chi chuan is a system that highly values ch’i. The core of Tai Chi is to sink chi to the dantian. Some of the basic principles of Tai Chi Chuan are relaxation, sinking, single-weightedness, differentiation of yin/yang and movement of chi with propelled action to generate momentum. Tai Chi practice relies on “silk-reeling” movements (reeling silk from a cocoon) which are slow, continuous and steady. The breath is also used to direct and propel the Tai Chi form.

“Concentrate your ch’i and develop softness. Can you be like a child?”
~Cheng Man-Ch’ing’s Advanced Tai Chi Form Corrections, Wile (1985)

The Tai Chi form is a series of slow, deliberate moves or postures. Tai Chi forms can be 24, 37, 88 or 108 postures depending on the form. Tai Chi is an enjoyable sport and practice for all; young and old, strong and frail, male and female. The form taught by Sifu Jill L. Basso is the Yang Short Form, developed by Cheng Man Ch’ing. There are 37 postures and takes 8-10 minutes to practice. The study of the Tai Chi form can take up to a year to learn and many years to master.

TAI CHI AS A MARTIAL ART

The classics state “In resting, be still as a mountain; in moving, go like the current of a great river.” Power generated from the body is the basis for its practice as a martial art, using the momentum, or massed energy to flow from the root to the hands, unstoppable, as one unit, to propel expansive energy toward the opponent. Only through our practice can we seek to achieve mastery.

Wolfe Lowenthal writes ” Professor characterized it as being like the mass effect of wind or water in a hurricane or tidal wave” and “the power of mass integration, like the individual droplets in a tidal wave. Tai Chi as a martial art uses the principles of non-force, yielding and neutralizing incoming power along with sensitivity and sticking energy. The well-known phrases: “Four ounces repels a thousand pounds” and “Invest in Loss” are the basis of the practice.

Tai Chi studies can continue in sensing hands & push-hands, which are two person exercises, along with Ta Lu, sword form and sword dueling and martial art applications. Tai Chi is well suited for women, based on the practice of non-force and less reliance on muscle strength. Power or Pung is generated from the root. In some schools, Tai Chi can evolve to San-jou which is full contact fighting. Other weapons in Tai Chi are cane and staff forms.

“Research into the Effects of Tai Chi” a Compilation for the U.S. Department of Health by Paul Lam, 2012 (pdf)

“Jill Basso is a natural teacher with a strong affinity for her subject: Tai Chi. I sought to learn Tai Chi to improve my balance and, thanks to Jill, my experience has become so much more.”

Tai Chi has philosophical roots in the Tao Te Ching, I Ching and other ancient Chinese texts. Tai Chi practice embraces this Taoist Philosophy and hence is the physical manifestation of opposing, yet complimentary life energies. When practicing Tai Chi one must balance Yin and Yang. It is completely required that these two energies exist. These energies are continually expressed in the Tai Chi form to create the perfect balance.

Yin is represented in the yin / yang symbol with black and yang is represented in the yin/yang symbol as white. Yin and Yang are not 100% pure, since there is some “yin” in yang and some “yang” in yin. For example, when one does the posture ward-off (peng), that is expansive or issuing energy, when one does roll-back (lu), one using contracting or yielding energy, yet one is not fully committed to either and both allow for constant states of transformation. It is total expression of unity. The yin / yang symbol represents 10, 000 states of transformation. 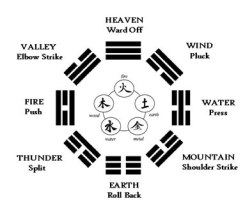 The practice of Tai Chi Chuan helps improve awareness of the body with its slow, continuous movements. This is true for both children and adults. The practice of moving slow supports focus and concentration and is rejuvenating. This creates balance in the mind-body connection and gives rise to relaxation, wellness and renewed energy for everyday life.

Since Tai Chi is an internal martial art, one’s body uses internal energy (non-force) rather than external, muscular force. Tai Chi accesses chi through one’s root (the ground), also known as the bubbling well spring (or Kidney 1 point in TCM), to enhance balance and coordinate movements. Through softness and relaxation of the body and allowing chi/energy to move through the organs and meridian channels. Tai Chi unifies and relaxes the body and mind. Stressing slow respiration and balanced, upright & relaxed postures, it promotes mindful, steady breathing, and improved functioning of the internal organs and blood circulation.

Tai Chi is a beneficial practice of self care. At a physical level, it improves flexibility of the spine, body, sinews and strengthens organs. Staying flexible is at the heart of good health. In Chinese, the mind is translated as “heart”, so staying flexible in mind, body and heart emerges from Tai Chi practice. This becomes particularly important as we age, and reach more mature stages in life, so that we can reap the benefits of Tai Chi for health, wellness and longevity. 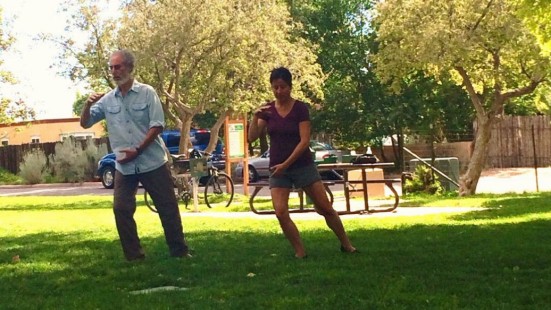 Tai Chi is born of Wuji, the mother of yin / yang. Wuji translated as “Ultimate Nothingness” or “Ridgepole” and is a practice of deep stillness. Practiced as a standing, meditation practice it teaches us stillness. As the classics say, from stillness comes movement. Wuji benefits mind, body and spirit. It has benefits that translate to self-defense applications such as relaxing, being calm and alert and steady. Wuji practice is truly a lesson in self-discipline and deep quieting that relate to the meditative and martial practice of Tai Chi.

CHENG MAN-CH’ING AND THE NY LINEAGE

Cheng Man-Ch’ing (1901-1975) was the Master of the Five Excellences: painting, calligraphy, poetry, traditional Chinese medicine, and Tai Chi Chuan. He studied Tai Chi under Yang Cheng Fu and developed a simplified 37-posture form, from the longer 108 posture Yang form. Cheng Man Ch’ing lived in China, then Taiwan and came to New York in the late 60’s. He established a school, The Shur Jung, for Tai Chi Chuan. He taught Tai Chi form, sword form and push hands and was known for treating patients at the school as a traditional Chinese doctor. Out of that school are some of the most recognized teachers in the United States. The Yang Short Form, developed by Cheng Man-Ching, is one of the most widely practiced forms in the world.

My teacher, William C. Phillips was a student of Cheng Man Ch’ing in New York City. He studied with Cheng Man-Ch’ing, at the urging and influence of Stanley Israel, from 1970-1975. He became one of the most junior students to teach beginners classes at Professor’s school. Master Phillips also studies karate, jiu-jitsue and Judo. In 1970, Sifu Phillips founded the Patience T’ai Chi Association. It was so named because of the quality he most wanted to be mindful of in his teaching and in his own studies. 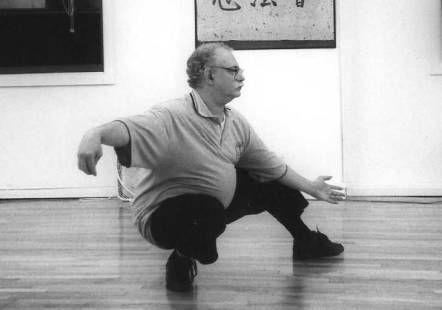 Sifu Jill L. Basso, is one of the six senior students to Master Phillips and is a Certified Patience Tai Chi Instructor. Master Phillips along with James Leporati highly influenced my Tai Chi form and Tai Chi practice for the last 19 years. 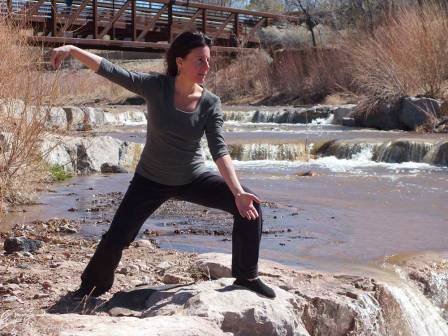